skip to main | skip to sidebar

Strong Enough To Survive - A tribute to Justin Fashanu ....

I remember seeing the newspapers during the week after Justin’s death and feeling sick to stomach. There were graphic accounts of his last movements and interviews with people who had met him, or spent time with him in his final hours.

The press hounded him throughout his career, drove him to suicide and then afterwards printed some of the cruellest, nastiest stories ever published in the UK newspapers. As an athlete myself I felt angry that Justin was never allowed to meet his true potential on the pitch. 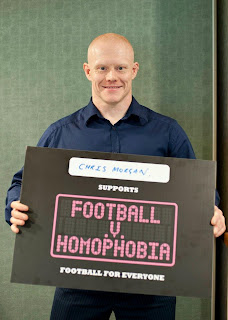 At the time all this happened I was just coming to terms with my own sexuality and was taking my first steps towards a career in sport. I realised that I was faced with a choice of whether or not to be open about my sexuality in the brutal and testosterone driven sport of Powerlifting.

Being out as a gay man in my previous sport of rugby union was impossible at the time. However, I knew in an individual sport like Powerlifting there was an opportunity to be openly gay and what had happened to Justin motivated me and filled me with strength.

For the next four years Justin’s story stayed with me as I strived to win my first title in Powerlifting, as it filled me with indescribable anger and rage. At the Gay Games in Sydney 2002, I won that first Gold Medal and immediately dedicated it to Justin’s memory.

I’ve gone on to win many titles and medals during my career and all this time Justin’s story has always been with me in the background. The fact that similar acts of bigotry are still happening today, means that Justin’s story is still as relevant now as it was in 1998.

I’d like to thank everyone at The Justin Campaign for keeping his memory alive.

Check out our exclusive interview with Chris here.

Posted by The Justin Campaign at 07:09

The Justin Campaign
Founded in memory of Justin Fashanu, the only openly gay professional footballer in the UK. Campaigning to challenge and rid homophobia from the beautiful game.

Have you encountered homophobic abuse while watching football?